In the News and Trending: Are You Better Off Now Than Four Years Ago? It May Be More Complicated Than You Think

Politics and the Perception of Economic Well-being

So, are you better off today? It’s a quintessential question that surfaces every election season, particularly during presidential campaigns — and it seems particularly relevant this time around. Given the coronavirus pandemic and associated economic problems, recent social unrest focused on racial justice and a continuing sense of crisis and turmoil lately, it would seem at a glance that most people feel significantly less well off now than in 2016. But, our inclination to jump to that conclusion — and thus to speculate about who would win in November — may have been misleading.

Let’s look at some of the reasons why, from a behavioral point of view. Behavioral scientists believe that in most situations, peoples’ perceptions, decisions and actions are highly influenced by context, emotions and incomplete information, thereby deviating from a classical economist’s model of the ideal “rational man.” How does this play into our sense of well-being?

We’ll start by acknowledging that our perceptions of whether we are better off now than in the past often hinge on how we’re doing relative to others. It’s human nature to compare ourselves and see where we stand, and an important part of that comparison involves our financial status.

Most people keep track of their finances these days, whether it be through an online banking app, financial services provider or simply an Excel spreadsheet. Websites like personalfinancedata.com, firstscore.com
and nerdwallet.com offer statistical data to evaluate your relative net worth, household income and more — feedback craved by millennials, Gen X and boomers alike. In a culture that seeks validation for hard work, these sites can be sources of emotional comfort, peace of mind or simply motivation to keep working toward financial and life goals. 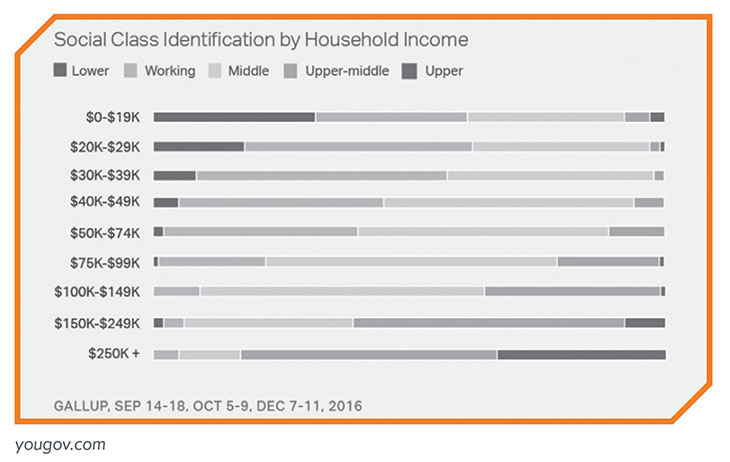 But even with the aid of such objective information, our assessment of economic well-being relative to others is highly subjective, and often distorted. Consider the data by YouGov.com (above), based on a Gallup poll investigating the social class people perceive themselves to be part of, across several income brackets.

Surprisingly, even in the lowest three income categories studied (less than $40,000 per year), a substantial number of those polled believed themselves to be in the middle class, upper-middle or even upper class. Perhaps equally surprising, in the highest three income brackets ($100,000 or more) a not insignificant number saw themselves as lower income or "working" class.

The bottom line? People cognitively distort their relative economic well-being. Another key take-away: most people tend to see themselves as “middle-class” — a term that is (perhaps intentionally) poorly defined. Few people view themselves as very poor, yet few see themselves as uber-rich, either. There appears to be a tendency — perhaps a desire — to identify oneself as “mainstream” and not as part of the “extreme” — or, worse yet the “fringe.”

The political implications are clear. Historically, extreme “radical” viewpoints have tended to be unpopular. The poor might be better off voting for socialist or labor parties, and the rich might benefit by voting for the conservative or libertarian ticket — but that is not necessarily what happens in general elections. Our two mainstream political parties still garner the lion’s share of votes. Both major parties in America are far more centrist than political parties in other parts of the world. In fact, some outside observers might suggest they are more similar than dissimilar in terms of policies and world view. As a result, Republicans (often portrayed as the party of big money) still draw a considerable number of votes even from very low-income voters, while Democrats (portrayed as the party of the common man) garner substantial support among even the very rich.

Why is this the case? Perhaps it’s something primal in our collective unconscious — the herd mentality of not wanting to be too far from the pack. Clearly, the question of how well we’re doing is subject to deeply ingrained cognitive biases and therefore highly open to manipulation. Most people don’t realize this, and, even if they do, they generally aren’t willing to entertain the idea that they themselves can be easily swayed. Political strategists know this, and they use it to their advantage.

We’re all familiar with spin doctors, optics and framing techniques used by major media outlets to tilt their reporting in one direction or other. During recent episodes of civil unrest, Fox News focused its cameras on rioters and looting, while CNN highlighted footage of peaceful, law-abiding protestors. The president rails about "fake news," and writers lament our post-truth society. But when it comes to impacting our perceptions of well-being, there are even more subtle tools in play.

One such tool is keeping the definition of middle-class as fuzzy as possible. Everybody likes to think they’re middle class. This, combined with the highly subjective nature of our financial perceptions, create a rich opportunity for manipulation by both major political parties. Politicians often speak vaguely of middle-class tax cuts, benefits and incentives. They are implicitly appealing to the sweet spot of the electorate, e.g., anyone who thinks they’re middle class. Republicans consistently try to raise the income threshold to be considered wealthy because it’s easier to convince voters of tax cuts for the middle class than for the rich. Democrats, on the other hand, attempt to bolster the ranks of those considered poor or working class, who are more likely to favor government assistance programs.

Another effective tool to manipulate perceptions of our well-being is to change overall societal opinions surrounding the concept of wealth itself. In the past, Americans considered wealth a positive virtue — the inevitable, justified end-result of hard work and sacrifice. Today, wide-spread public sentiment seems to have shifted. The wealthy frequently face a degree of contempt, scorn and even derision in social situations.

As a result, it’s recently become fashionable to downplay one’s material wealth. MarketWatch.com recently ran a story describing numerous examples of wealthy people (earning above $500K per year) complaining that they cannot make ends meet financially while living in urban areas. The New York Post reported a recent backlash to ostentatious displays of wealth, resulting in what they called a “faux austerity” among the rich — claiming that in this environment “money can buy you a lot of things, but not necessarily good publicity.”  The rich may be de-emphasizing their wealth to appear more mainstream simply for their personal safety and survival, given the vitriol of recent protests.

Our views about our well-being may be not as closely tied to our actual standing today, as to our perceptions of our prospects for the future. The fact is that that as a species, humans are just not that well adapted to accurately contemplate complicated financial matters. After all, dealing with money has only been a concern for us in the last couple of thousand years — a tiny fraction of our evolutionary history. So, while it’s tough for us to wrap our heads around our actual quantitative well-being, we can easily assess more qualitative aspects of our condition, and we tend to see the future with rose-colored glasses. While this optimism is one of the more endearing characteristics of the American people, it’s also an easy bias to manipulate by politicians and political strategists, especially anyone challenging incumbents in office and the status quo.

While traditional economists have long modeled human decision making by assuming complete rationality, behavioral economists have more recently established that our choice process is instead largely illogical — driven by emotions, incomplete information and social influences. Using electroencephalography, computer assisted tomography and functional magnetic resonance imaging, behavioral psychologists have discovered that during decision making, the locus of activation is the limbic brain, including the amygdala, hippocampus and hypothalamus — the ancient part of our brain that developed first in the evolution of our species. This part of the brain controls our emotions, affect and behavior, and has no capacity for language processing, calculations, planning, organization or logic. So, it seems that instead of prolonged information processing building to a rational conclusion, instead we often make quick decisions based on emotions in our limbic brain, then rationalize these choices using information processed in the cerebrum (more specifically the cerebral cortex), which is the more recently evolved part of our brain.

Political strategists are well aware of these findings and skillfully direct their candidates’ marketing campaigns to capitalize on the implications. They know their campaign messaging must include volumes of information on their candidate’s past achievements and strategic plans for the future of the country and economy. And yet, these facts and figures only provide fodder for voters’ post-choice self-justification for what ultimately will be an emotion-based vote. While voters claim to want detailed policy statements, what truly sways them — and thus what truly forms the heart of any campaign — are emotional factors. In this election season, perhaps unfortunately, both parties seemed to appeal to a very primal, very motivating emotion: fear. Former Vice President Joe Biden tapped into voters’ fear of another four years of chaos and controversy, while President Donald J. Trump tapped into fear that Biden will bow to extreme left-wing forces in his party.

What are we to make of all this? Clearly, public sentiment today points toward a desire for a gentler, less tumultuous political landscape than we have experienced recently. Those not content with things as they are seem empowered to seek change, and perhaps dramatic change. But the question of how people will evaluate their well-being today compared to four years ago, and how that will impact the outcome of the election, may be much less straightforward than we would like to believe. As is usually the case, the polls and the pundits can only take us so far. All will be revealed only after the ballots are counted in November.